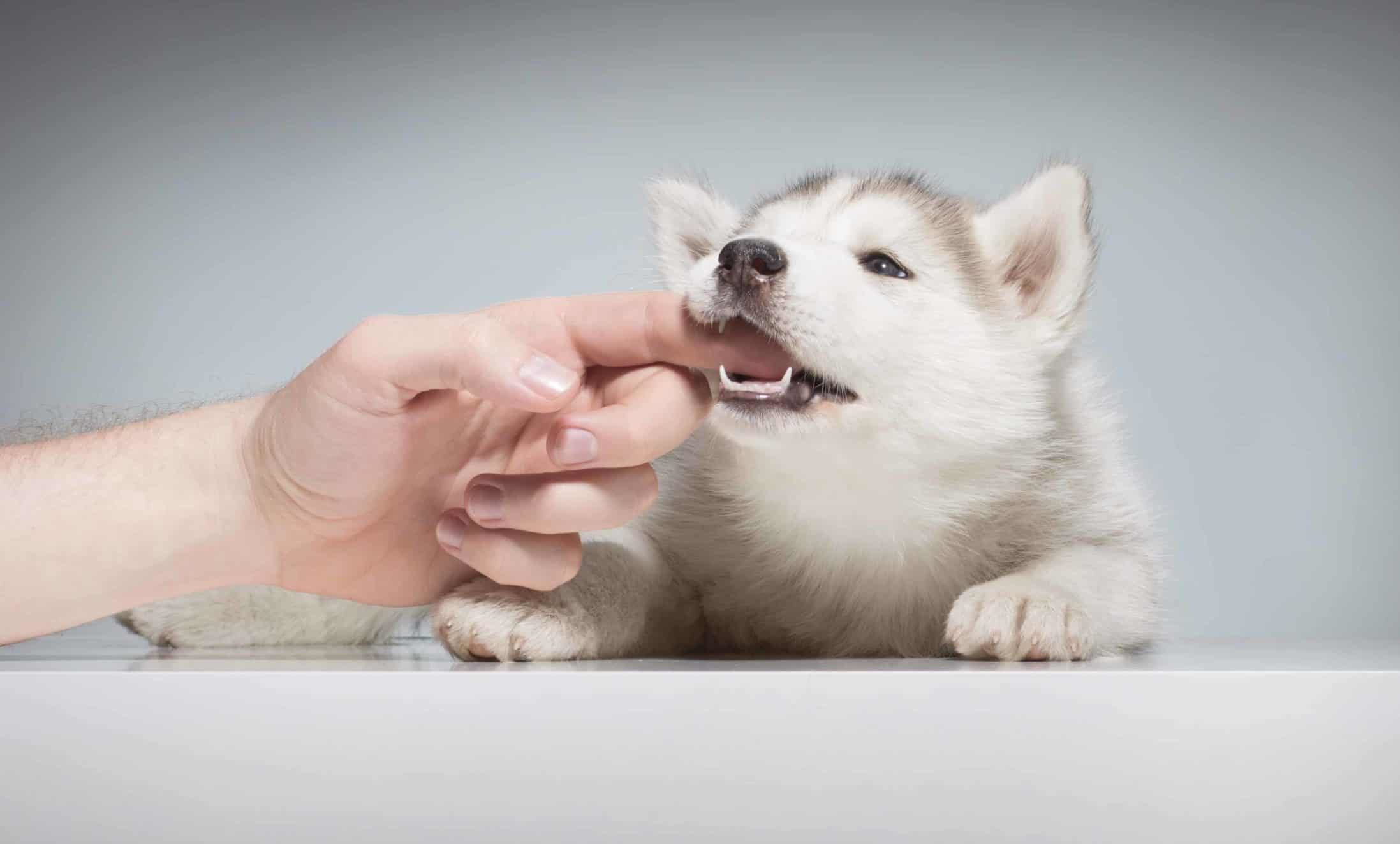 Hunting is part of the husky’s DNA; as a result, the husky puppy bites so much. Carefully observe a husky puppy, and you will notice nipping or biting stuff, including human beings. This behavior is cute and friendly when the puppy is still under four months, but it can be dangerous when it gets adult teeth.

This article will provide various techniques or methods to stop the behavior of husky puppy bites so much. All methods aim at making the husky puppy understand that biting humans is terrible. You have to provide an alternative thing for it to chew on, like a toy or soft bone. Do not scold or punish the puppy; instead, give positive reinforcement whenever it stops.

Reasons Behind Husky Puppy Bites So Much You can see husky puppy bites so much from the introduction because they are hunters. For many years huskies have been helping humans to hunt and protect them. As a result, husky puppies train themselves to hunt by biting on things and humans. So do not be worried whenever you see this behavior. However, do not encourage it because it can be dangerous in future.

Huskies shade off their puppy teeth to give a chance for adult teeth. Studies show that the gums are itchy during this period, leading to the behavior of husky puppy bites so much. While teething, the puppy will also chew on other stuff like furniture and toys. Vets have certain drugs to reduce the itchiness or give it a toy to chew on.

Husky puppies are playful and love their masters. Husky puppy bites so much when it realizes the master is not in the mood to play. A puppy that wants attention will start barking and jumping, then biting when you ignore the early suggestions. Always play with your husky puppy for at least thirty minutes a day, and it will stop biting.

4. Exploring the environment and learning the master

Husky puppies use their mouths to explore the environment and dig up things. They are new in the world and want to know what is what. Husky puppy bites so much when it wants to understand the trigger points of its master. It wants to learn things the master disapproves of and those he loves.

Choose a command word that you will use to teach your husky puppy. For example, “hey”, “stop”, “you”, “no”, or “no bite”. Remember to be consistent with the word so that it sticks in the husky puppy’s brain.

Always be quick to shout out the command word once the teeth touch your skin. A husky puppy has a good grip; hence continue giving the command word until the pressure lessens. Reward the puppy when the hold is released or reduced. At first, it will not release the bite, but it will learn to let go with the reward.

Be persistent with the command word and let everyone in your house use the same command word. Soon and very soon, the puppy will be expecting a reward when it hears the word. As time moves, do not reward it until it lets go of the bite. Even when it lessens the pressure, do not reward it. 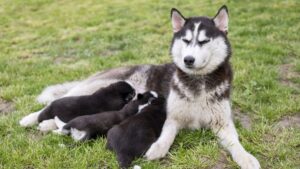 You have to understand what a mother husky does when a husky puppy bites so much. The mother husky grabs her child by the muzzle (the nose area) or by the scruff (loose skin on the neck) and isolates it.

When your husky bites so much, grab it by the scruff or the muzzle then instincts will tell it to let go. Next, apply some pressure on the muzzle to warn that it is terrible to bite humans. Do not shake the puppy while applying the pressure.

Discipline Tips When Husky Puppy Bites So Much

The thumb rule is to “discipline but don’t punish a husky puppy”. Of course, it is hard to get discipline without punishment, but here are tips you can use to achieve it:

When a husky puppy bites so much, it is bad behavior and should be discouraged. Give it rewards and treats when it stops biting. Petting and praise are also rewards for a good puppy. You can also elongate the playtime as a reward for good behavior. It helps a puppy understand what the master wants from them.

2. Show you are the master

A husky puppy will respect the owner when you show explicit control over it. It will learn to follow your commands immediately after you place the order. Many husky owners confuse this with shouting at the puppy; please do not do that; it only scares the puppy. Moreover, your puppy will be running to hide once it sees or hears you.

Use single words such as “no” or “yes” for your puppy to quickly understand your commands. It should know that “no” means it is doing something wrong and “yes” for positive behavior.

A dog psychologist relates a puppy to an iron box; it takes longer to get hot and takes time to cool down. Similarly, puppies take time to learn desirable and undesirable traits, but they will never forget; consistency will make them understand. Every day, reinforce a specific habit, and it will discover it is good or bad. Do not allow a bad habit to slip even once because your husky puppy will get confused.

Discipline your husky puppy immediately you find it doing the wrong thing. There and then is how it will understand it was doing something wrong. When your husky puppy bites so much, discipline it at the moment, not a few minutes later. Monitor your husky puppy every time it is playing, even while sleeping.

Timeouts is an old school technique to discipline naughty kinds. The same can work when your husky puppy bites so much. Take it to isolation away from any activity, and it will come back relaxed and peaceful. Remember to give it a timeout immediately you find it biting a human, and then it will learn never to bite. A reasonable timeout should be at least five minutes.

When your husky puppy bites so much, it can be seeking attention from the master. Furthermore, it means you should understand your puppy’s needs any time it starts biting so much. Ignore whenever your husky puppy bites so much, and it will learn it is a useless behavior that leads to a dead end. But remember to reward it when it stops biting, and next time it will relax beside you for a reward.

What Not to Do When Husky Puppy Bites So Much

Do not hold down; throw in the air, or shake your husky puppy because it can lead to fear. Or can make it courageous to challenge the master. Making your puppy submissive will build aggression that will emerge later in adulthood.

Do not shout at your husky puppy because it makes them hyperactive and anxious. Do not shout or scream while giving commands but use a calm and firm tone. Dog trainers and psychologists discourage collar jerks and electric fences because they only provide short term results when the master is around.

Other Bad Behaviors in Husky Puppies

Apart from husky puppy bites so much, unconditional barking, whining and howling are also destructive behaviors. It is terrible when your puppy aimlessly barks at your neighbors, other dogs or vehicles. You have to discourage this behavior before it matures. Whining and howling is a sign of boredom, excitement and anxiety. Use the discipline methods above to stop this bad behavior.

Pooping and peeing indoors is another lousy behavior. But dogs are easy to train to go outside. First, create a routine that the puppy will understand time to eat and time to poop. Show your puppy escape routes in your house and take it outside thirty minutes after every meal. Keep your husky puppy in the crate, and it will respect its sleeping space; hence it will never urinate in its bed.

Do not get surprised when your husky puppy bites so much because it is natural to do so. It is trying to learn how to hunt and defend its owner. Sometimes, the behavior can start when the puppy is teething and trying to relax the itching gums. Husky puppies love attention; hence when you ignore it, it will bite. Or simply, it is exploring the new environment and getting the trigger points of the master.

Use the no bite technique or the mother dog technique above to stop your husky puppy from biting so much. Always redirect the energy to a new thing like a chew toy or soft bone, and your puppy will remain happy. Be firm, consistent, and show that you have power over your puppy for successful training. Read our blog post on why your husky can be following you everywhere.