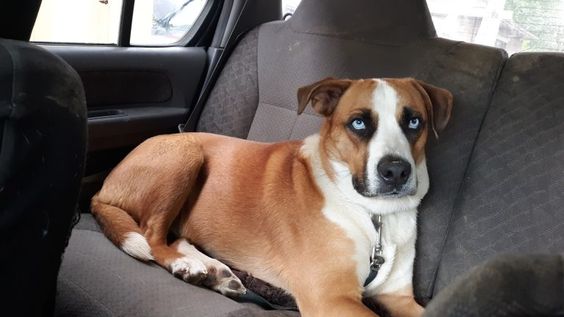 A Boxer Husky Mix is a hybrid dog created by crossing a purebred Boxer with a purebred Siberian Husky. This hybrid is descended from two working dogs. During World War I, the Boxer served as a courier, hunting, and tracking dog for the military. Meanwhile, the Siberian Husky was bred to aid in the towing of sleds through Siberia’s freezing tundra.

Here, we will tell you all you need to know about the Boxer Husky Mix. We will discuss physical traits, temperament, and exercise requirements, among other things. In this manner, you can determine whether a Boxer Husky mix is a good fit for you.

A Boxer Husky Mix is a crossbreed between Boxer and Siberian Husky, two working dogs.

How old are Boxer Huskies? To be true, nobody appears to be certain when the crossbreed started.

The Boxer breed originated in the nineteenth century in Germany. Boxers appear to have originated as hunting dogs. However, the majority of them ended up serving as ranch dogs or armed forces dogs. They began appearing in the United States at the turn of the twentieth century.

Additionally, the Siberian Husky was a hunting dog. However, the Husky’s origins trace back thousands of years. They migrated from Siberia to Alaska and Canada in the early twentieth century to work as sled dogs. They were registered with the American Kennel Club in 1930.

The Husky Boxer Mix has a striking resemblance to the Boxer in appearance. The body of this canine can range in size from medium to huge. It adopts an attentive and inquisitive demeanor.

While the breed is frequently brown-eyed, it might acquire the Siberian Husky’s piercing blue eyes. Its short to medium-length coat varies in color from tan to fawn to white with black.

The coat is noted to have a dense texture, similar to the Siberian Husky. Ears can be upright or floppy. The tail is typically long but with a short coat.

Husky Mix Boxer dogs are clever, and they may be a little overwhelming for first-time dog owners. They are also incredibly energetic and eager, which means you’ll need to plan a variety of activities to keep these pups cognitively and physically active.

They are not hesitant to express themselves if they feel they are not receiving enough attention, which requires careful training to avoid being excessive, especially if you enjoy your neighbors. They are protective of their family and may become excessively territorial if not properly socialized at a young age.

They also like the companionship of their humans and will make every effort to spend as much time as possible with them. Their activity and training requirements imply that you’ll need to commit a significant amount of time each day to ensure that your dog is well exercised before you can sit down. They’ll let you know immediately if you neglect to take their daily stroll.

This is the point at which you will need to commit a large amount of time and effort. Boxer Husky Mix dogs are extremely active and will grow frustrated if not provided the exercise time. These dogs would struggle if they are deprived of their daily stroll.

Once fully matured, you could anticipate spending around 90 minutes each day exercising these dogs. A daily 2-mile walk, along with a training session and leisure time in the backyard, will keep your Boxer Mix with Husky dog happy and exhausted.

You’ll also need a properly secured yard, as they have been known to escape either burrowing or leaping. Additionally, it is better to walk them on a leash, as their recall is not optimal when distracted by anything attractive.

How to Train a Boxer Husky Mix?

You may believe that training a dog that is a crossbreed between two working dog breeds would be simple. It’s true—these canines’ intellect, friendliness, and need for attention may assist you in training them. And certainly, boxers have historically been rather easy to train. However, Siberian Huskies? That is a different story.

Huskies frequently prefer to venture off on their own. They may be obstinate and prone to distraction. These characteristics are sometimes more evident in Boxer Husky mixes, frequently outweighing the trainability of their boxer parents.

It will be simplest to teach a Husky Mix Boxer dog if you adopt him while he is still a puppy and immediately begins training. Do not postpone critical training. The older your puppy becomes, the more difficult it will be to train him efficiently.

How Much Are Boxer Husky Mix Puppies?

Because the Boxer Husky is still a somewhat uncommon hybrid mix, it’s advisable to seek a trustworthy breeder with expertise with this specific cross. Puppies will likely cost between $800 and $1,000, and the price may vary based on the breeder’s reputation and region, as well as the coat and eye color of the puppies.

While the Boxer Mix with Husky is not one of the more well-known hybrid breeds, these active dogs have a lot going for them. They adore their family and are devoted and watchful hounds. They’re typically healthy and quite low maintenance in terms of feeding.

You’ll need to ensure they receive enough activity each day. This is not a breed that will happily spend the entire day indoors, and failing to exercise these dogs adequately can put you in a difficult situation. They are sophisticated enough to discover various exits from a protected garden.

If you have an active family with older children who like spending time outside, the passionate and loyal Boxer Husky Mix may be the ideal addition to your family.

How big does a Boxer Husky Mix get?

The Boxer Husky is a medium-to-large-sized breed that typically weighs between 35 and 80 pounds and develops to a maximum height of 35 inches.

Are Boxer Husky Mixes a nice breed of dog?

This Mix is an excellent home companion for families with a lot of room, an active lifestyle, and prior experience with dogs.