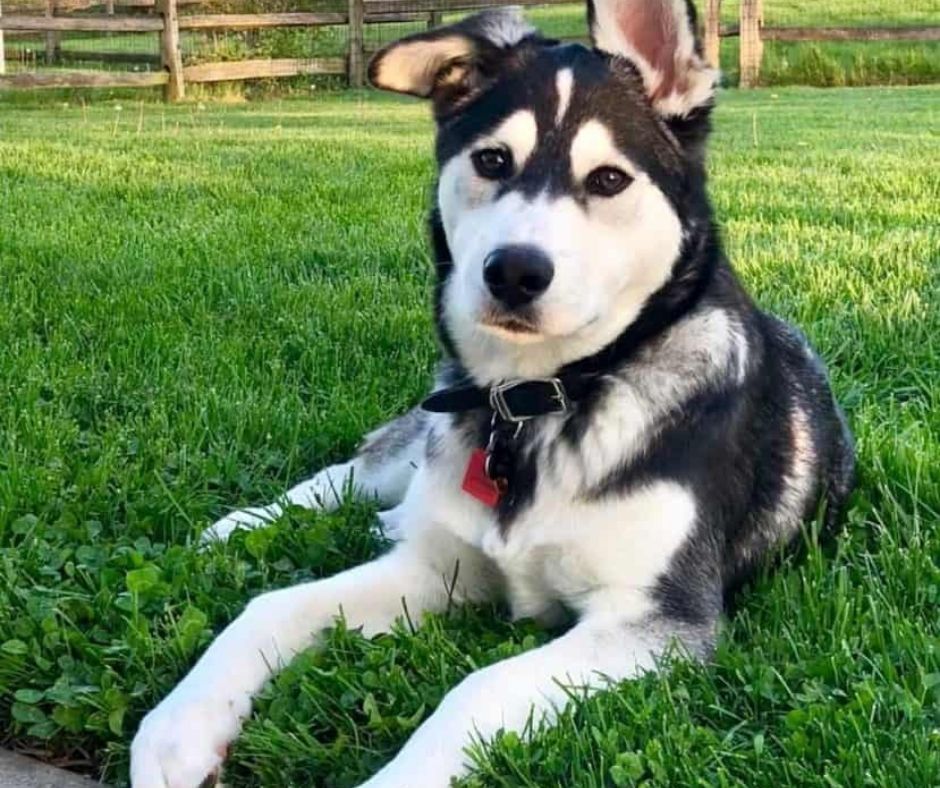 Great Pyrenees Husky Mix is descended from the perceptive Siberian Husky and the magnificent Great Pyrenees. Also known as the Pyrenees Husky, this medium to a large-sized dog is an excellent family dog because of its intelligence and devotion. As both parent breeds are working dogs, this cross is strong and very energetic.

They are quite brilliant and also incredibly loving. They may, however, be quite obstinate. They like to solve problems on their own, and this independence can make them tough to deal with at times.

Due to this breed’s intelligence, they will attempt to learn things on their own and at their own pace, which can make training difficult but not impossible. Continue reading to discover more about the Great Pyrenees Husky Mix and the responsibilities associated with caring for this breed.

Great Pyrenees Husky Mix puppy is a cross between the two parent breeds. He is a dog of medium to huge size. He will inherit his parents’ thick coats, although his coloration will vary. He may be completely white or bear the Husky’s black markings.

Typically, his snout is long and his nose is black. His eyes, like those of his Husky father, maybe blue. They might also be amber in hue. Ears may be upright, as with the Husky parent, or floppy, as with the Great Pyrenees parent. If so, you will need to exercise extra caution when grooming their ears. Great Pyrenees Husky Mix will most likely have long hair and a strong, waterproof double coat.

Pyrenees Huskies are friendly and tolerant when properly socialized. They can easily mix with people of all ages and enjoy spending a lot of time with their owners. This breed prefers extended treks outside, particularly on challenging hiking paths.

Pyrenees Huskies are typically placid and like playing. However, before they can engage in recreation and leisure, they must expend some considerable energy. Indoor play should also be a focus, as should constant training attempts. Owners should discover that their Pyrenees Huskies are obedient and trustworthy with consistent training.

This mixed breed requires extensive grooming. Weekly brushing will be required to avoid matting and remove loose hairs from their thick double coats. They shed the whole year, but mostly in the spring and fall. Daily brushing with a pin brush or a de-matting comb will significantly assist in controlling their shedding and preventing excessive dog hair from getting into your clothes and furniture.

Additionally, you may bring your dog to the groomer during shedding season to have his or her coat blown out. Before grooming, the undercoat is removed using a dog blower. This saves you a lot of time and work when it comes to brushing or combing out their fur.

If they have inherited their Pyrenees parent’s floppy ears, they will require particular attention to their ears. Once a week, clean their ears with cotton balls and warm water. Keep a close eye on them. Any bad odor or redness is unmistakable evidence of illness.

Make brushing their teeth once a day a routine for dental and oral care. It will aid in the prevention of tartar build-up, tooth decay, and foul breath. Their nails must be clipped using a nail clipper every two to three weeks or when they become excessively long.

As a medium to large dog, the Great Pyrenees Husky Mix is ​​very fond of food, especially if it is exercised daily. Dry or wet dog food with a high fat and protein content is an excellent choice for pups, as it will aid in their quick growth. Adult dogs may live on a diet mainly of grains and vegetables.

The Husky Great Pyrenees Mix is an energetic breed of dog. He is also extremely curious, and if left alone, he would dig or leap over fences less than six feet in height to go out and investigate. To avoid boredom, take him on walks, lengthy jogs around the neighborhood, and, if you have an appropriate outdoor location, allow him to spend time outside.

Keep in mind that he is a bit of an escape artist, so confine him to a fenced-in area that he cannot climb out of or dig out of. Visits to the dog park should be limited to those who have completed some basic obedience training.

Although he has a proclivity for wandering, an older (more mature) Great Pyrenees Husky Mix is more likely to settle in and enjoy the dog park.

How Big Do Great Pyrenees Husky Mix Get?

The Pyrenees and Husky Mix dog’s approximate size covers its weight and height. The weight limit is 75 lbs and may be increased to 100 lbs. When it comes to height, the range begins at 18 inches and ends at 22 inches.

Consider adopting the Pyrenees Husky if you are looking for a strong guard dog that can live well with humans and be reunited with a family with many pets. This is a devoted mixed breed that will not disappoint you whether you’re out playing in the park or keeping a watch on your house while you’re gone.

Owners must demonstrate a commitment to training, friendship, and physical activity. However, the work will result in an exceptional canine companion that will accompany their owners on their greatest experiences.