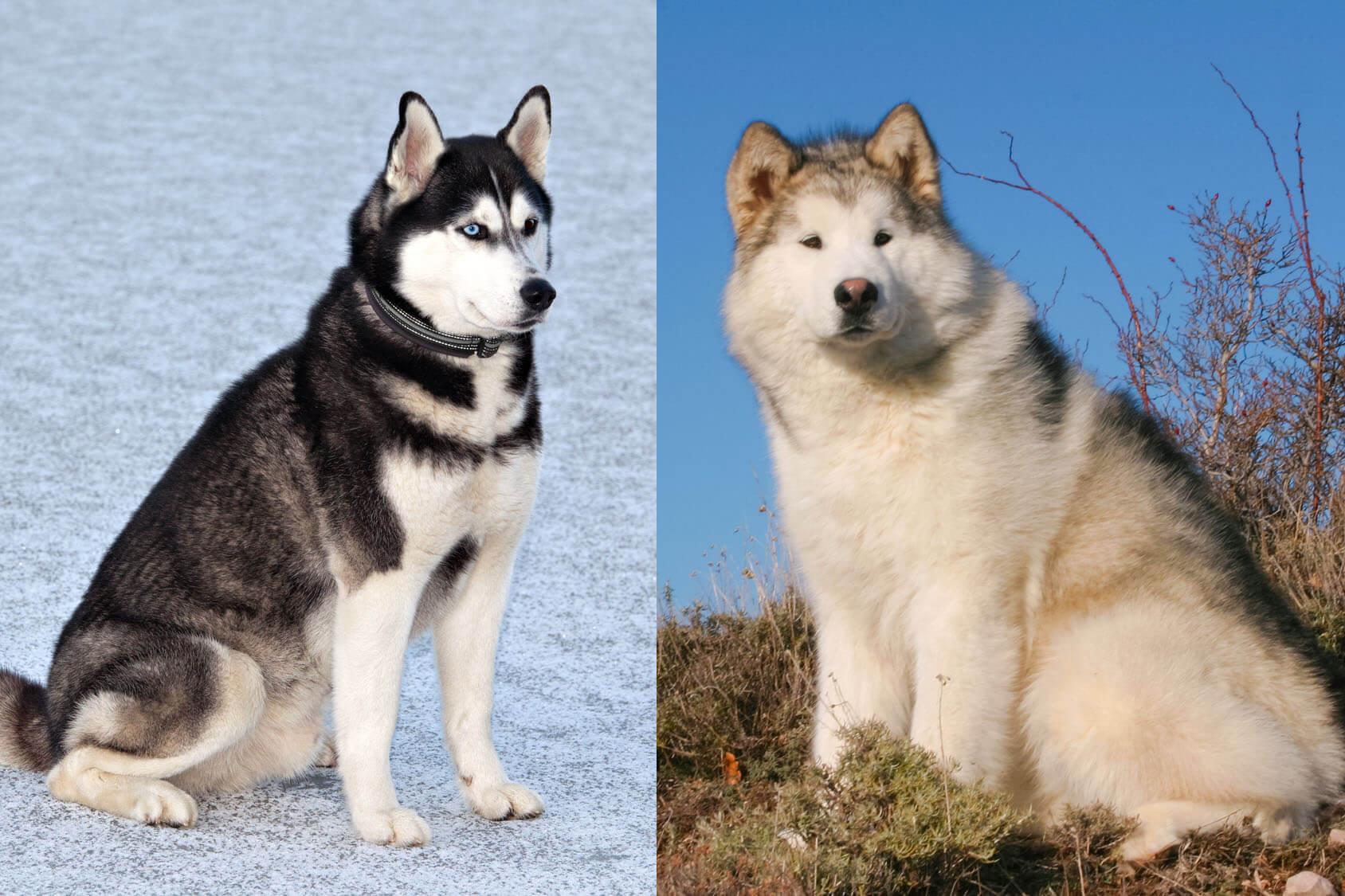 Huskies and Malamutes are like doppelganger. They look like twins, that there may be a chance that your pet is a Malamute instead of Husky or vice versa. Huskies originate from Siberia; that is why they are most common in the name of Siberian Husky, while Malamutes originate from Alaska but did you know that their ancestors came from Siberia before coming to Alaska? This may be the reason why Husky and Malamute look the same in appearance and traits.

Dog colors are one of the factors that need to consider to know the breed of dog you have. Although most of the dog owners believe that there is no relation between the color and their temperaments, there are still some that use this as a basis for their traits.

According to American Kennel Club, the only official colors of a Husky are gray, black, white, red, agouti, and sable. Agouti color is the type of Husky with a wilder look than the Wolf Grey. Husky with sable color are those who have light red to brown color but having a black nose. Aside from these, Huskies may have a prominent white color with scattered spots that has a different color. They also have different types of eye color that can be used to distinguish a Husky. The standard eye colors of a Husky are blue and brown.

Malamutes have almost the same colors as Huskies. But, Malamutes often change their colors as they grow. They have two shades of agouti color; light and dark. Puppy Malamute usually has the darker type of agouti. They also have a shade of cream on the face, and as they grow old, they start to have lighter agouti. Adult Malamute still has brown or black markings, but cream or light brown is more prominent than other colors. If you try to look at a puppy and an adult Malamute, you will see the difference in their shades. To distinguish also an adult Malamute to puppy Malamute with other colors, you will notice that if the puppy has a solid color, then it will become lighter when becoming an adult and vice versa.

Dog sizes are generally based on the proportion of their height and weight. They are classified simply into small, medium, and big or large dogs. Knowing the size of a Husky or Malamute is vital to see if it is suitable for your home with your kids.

A Siberian Husky commonly grows up to 25 inches from its shoulder blade. Also, they weigh up to 60 pounds that are proportional to their height.

Malamutes have similar height with Huskies, but they weigh much more for up to 85 pounds. One thing that describes a Malamute is that its length of the chest is half the height of the dog from the shoulder blade. Lastly, Malamutes have a proportional weight that there is no excess weight from their coat and bones.

The coat of a dog is a combination of skin and fur or hair. It consists of the top guard and the undercoat. The top layer, known as a guard, as its name suggests, protects the dog from the heat, water, and bugs. At the same time, the undercoat is the one attached to the skin that maintains the temperature of the dog. Huskies and Malamutes are common in cold areas, so their coats are the most crucial thing they have to survive.

Huskies have medium-length hair but not the point it covers the face. Shedding is expected, so do not be afraid if you observe the sudden appearance of its undercoat. Lastly, trimming is advisable, especially to its snout, because of the overgrowing of the whiskers.

Malamutes have a thick and soft coat. They also have short fur that only measures 2 inches in depth. As a result, malamutes do not need to be trimmed often. After all, they shed naturally as the season changes, except for their feet because their hair grows faster on toes. They also have unique markings on their forehead or chest.

BASED ON THEIR TEMPERAMENT

Knowing your dog’s temperament is as important as you do before making friends. This is to know their personality if they are too aggressive for you or if they can’t be left alone. Huskies and Malamutes may look scary and wild, but you will see their deep interest as you read this part.

Siberian Husky is very friendly, but you still need to supervise your kids and visitor because Huskies may tend to be aggressive when triggered. Huskies are also energetic so if you plan to take a walk with time, always put a leash on them because they like to walk independently.

Malamutes are one of the most loyal dogs that makes them attractive. They want to play all the time so get ready to have lots of energy. Malamutes are also very affectionate, so they are indeed a good companion and a house dog. They have almost the same traits as Huskies, so do not fall into their cuteness. Always have more prominent space for your Malamute, and do not leave it to your dogs unsupervised.

HEALTH CONDITIONS OF HUSKY AND MALAMUTE

Knowing the possible health conditions of your dog may help you prevent their complications. Early detection is always better than looking for a cure. It is essential to know the genes of the parents of your dog to see if they need to have exercise and activities daily or they need to stay inside.

Most of the Huskies tend to have broken hips or joints and eye disorders. However, they are still healthier than other types of dogs, especially in terms of infestations. Huskies have a low risk of parasite and bug infestation because they are naturally clean and do not have a pungent odor. To avoid having the chance of broken hips, do not let your Huskie overeat. Instead, maintain their ideal weight by having high-protein meals because they still need the energy to play with you.

Huskies have a high risk of blindness; that is why they have a strong sense of smell. Their eyes deteriorate as early as six months, so better to reach the vet once you bring Huskie to your home. Another eye disease that a Husky can have is Corneal dystrophy. This eye disorder is congenital in that there will be spots on its cornea. Unfortunately, there is still no cure for corneal dystrophy so expect your dog to have a blurry and opaque vision.

Another health condition of a Husky is unusual shedding. As mentioned earlier, Huskies usually shed if there is a sudden change in season. But, if it sheds on a regular day and has a bunch of fallen hair, it may have a zinc deficiency.

Malamutes tend to live longer, up to 12 years. But, they still have a chance to acquire diseases that are common to dogs. Malamutes love to munch; that is why they are prone to obesity—because of this, bloating is their main problem. Owners tend to give more treats to Malamutes because they can’t resist their emotional and heartfelt eyes like they are wanting for food. Malamutes tend to bloat because they have narrow chests but have broad abdomen.

If bred incorrectly or has gene defects, Malamute may have dwarfism disorder or be short until they mature. Because of this, they will have weaker bones leading to dysplasia. Another health condition of a Malamute is having poor coordination because of neuropathy. As a result, they tend to lose their balance and have difficulty in perceiving instruction.

One thing you need to know about their health is that they have a high risk of VKH Syndrome. This condition targets the cell responsible for their hair and fur color and also their eyes. As a result, they can be irritated because of pain somewhere in their body and can be blind as the disease progresses. VKH Syndrome is an autoimmune disease where it damages the pigment-producing cells and the eyes.

Huskies and Malamutes have the impression of being wild because of their outside appearance. But, they are so friendly and can be a house dogs because they are loyal like other breeds. It is essential to know their differences to avoid accidents like giving food that is for Huskies, but you have Malamutes. So, this article can help you understand your dog more.