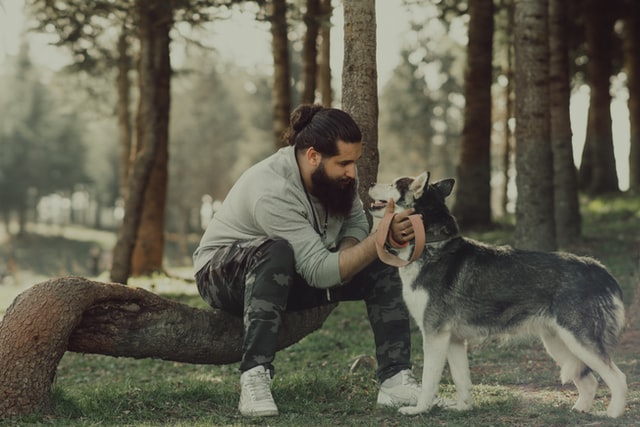 Are you afraid to bring home a husky as your new pet buddy? Are you still intimidated due to their wolf-like features? To give you a snippet of their temperament, huskies are very loyal. But, is this good or bad behavior? One trait that we love as dog owners are having a special attachment to our dogs. But for huskies, do you think it’s applicable to them? To find out, let’s discuss the temperament of huskies when it comes to loyalty and attachment.

Husky’s Loyalty To One Person

If the huskies have wolf-like built and genes, is it possible for them to be loyal to just one person? Husky’s temperament usually focuses on being the leader, so you may feel its authority especially when barking. But! Husky also has a sense of sweetness and loyalty towards its owner. So why does this happen?

Huskies are, as many dog owners will tell you, a unique breed. They can possess loyalty and love, but they can also be extremely independent and difficult to train. Their mixed heritage is part wolf and part Siberian husky, which means that their temperament is fiercely loyal to the pack.

It’s no wonder that many huskies don’t like to leave their pack behind when venturing out on walks or running errands. This behavior is their way of showing loyalty to one another and can be passed to their owners. While most people consider this to be a troublesome trait, it’s actually just a part of what makes huskies so special.

🐶 Training them to create a bond

The key with huskies is figuring out how you fit into their lives and not the other way around. There are some practical things you can do to help ensure that your relationship with your new pal is on the right track from the start. Train them early on as puppies instead of waiting for bad habits to set in.

Also, make sure you have time for them because a husky won’t love one person more than another if it feels neglected. Lastly, let them form relationships with people outside their family. Your husky should not feel like it has been replaced when your friends come over, because who doesn’t love a friendly pup?.

Huskies are very affectionate dog breeds, but they are not as cuddly as other dog breeds. Even they have high loyalty, huskies don’t enjoy being held or carried around by their owners and they prefer their own space to be cuddled. A husky that is comfortable with his human will show affection in the way of licking and playful behavior such as running around the house or nuzzling up against you when you’re sitting down or laying on the floor.

This behavior is because of their perception of being the “leader”. And if you are not professional enough to hold a husky, cuddling it may cause aggressiveness because this action can be a threat to your pup.

Huskies are well-known for being pack dogs, long-lived animals that thrive in the company of other dogs or people. Back in the old days, these scrappy creatures were often used as sled dogs in Alaska and parts of Canada. But with modern times came a new problem: huskies have gotten bigger and have begun to live longer than their human handlers ever intended. Most owners find themselves walking them on leashes most of their lives, sometimes even when they’re not around.

For many people, the idea of letting their husky out alone for long periods can seem troubling, especially when you realize just how bored huskies can get if left alone all day. Remember that they probably need more exercise than you think. However, there are plenty of ways to keep your dog occupied so it doesn’t get destructive while you’re away.

🐶 Here are a few examples:

Make sure your husky has plenty of love and attention from you on a regular basis throughout the day. This will help keep your husky happy and contented and make them want to play with you. Giving your husky attention is the first training you need to do as an owner because you have to establish a connection with your husky.

🟢 Accessorize your husky with a sweater

Huskies tend to be chilly when they’re out in cold weather, so this is one way to keep them warm while still giving plenty of attention all day long! You can also customize its sweater because huskies can also sense your intention especially when you give something.

🟢 Play a game with your husky

If you don’t feel comfortable leaving your husky alone too much during the day, try playing with it every once in a while. It’s simple enough for any type of breed or size! You could play fetch or hide-and-seek or any other game that appeals to both you and your husky. The key here is simplicity. Always set up games for your husky at home because this will ensure that it doesn’t get boring when left alone all day.

When people think of huskies, they may think of the iconic sled dog. What many people don’t know about these dogs is that they are extremely loyal and loving to their owners. They are pack animals, which means that they get attached to one person in particular and love that person unconditionally.

Huskies can be very friendly and playful with other people as well. A husky gets attached to its owner more than anything else and is always there for them no matter what, whether it be just relaxing on the couch or going out on a hike together.

Lastly, if you’ve adopted a husky but it doesn’t seem to like you, don’t worry. It’s not personal! Huskies are known for having independent personalities and a difficult time getting attached to people. They prefer living in the moment and bonding with animals and nature, not humans. But the good news is that it’s possible for your husky to develop a bond with you over time.

If your husky likes to throw tantrums, check the next article by clicking here to know the possible reasons for this behavior.