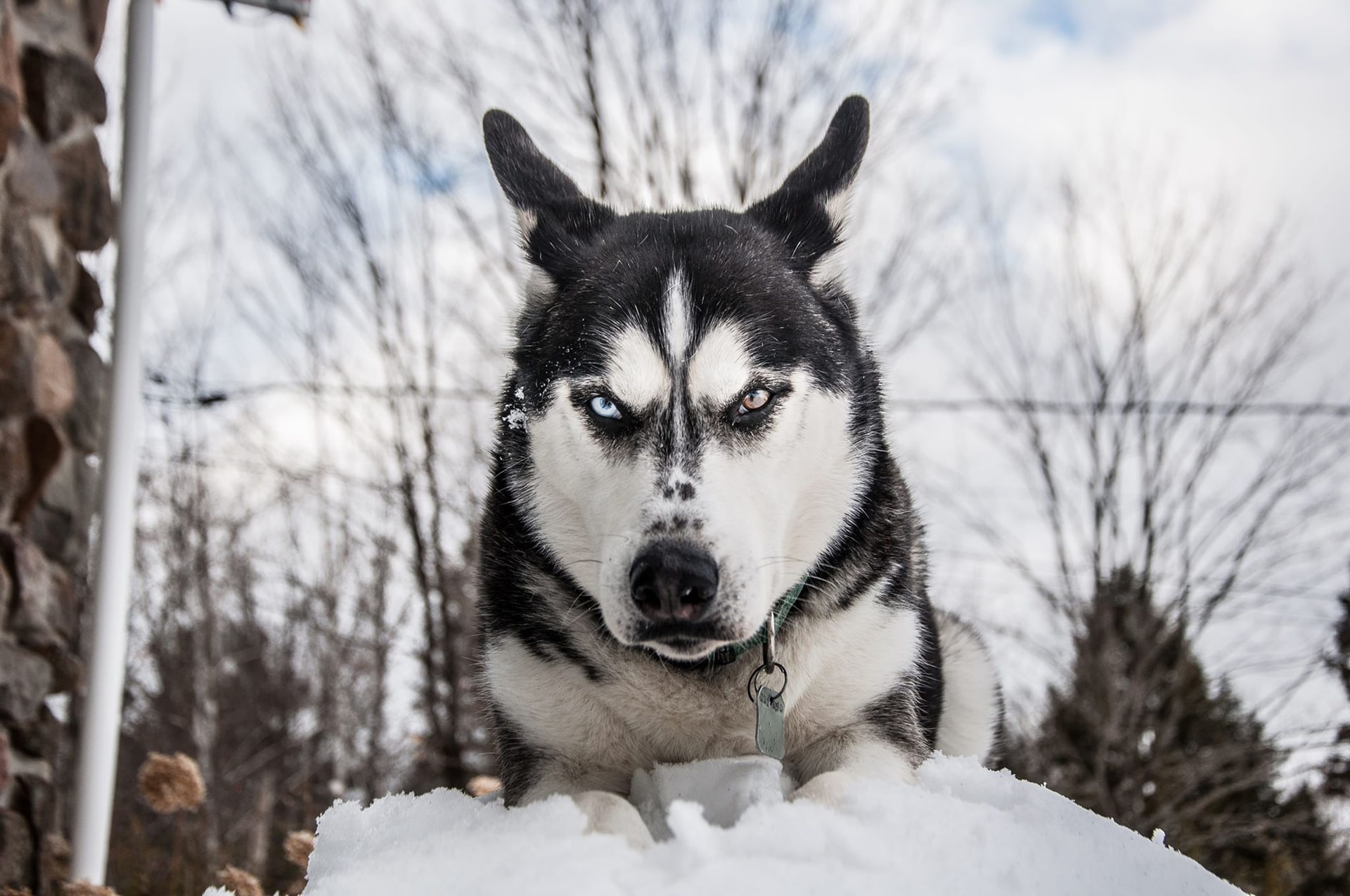 Do huskies look angry? Huskies are dog breeds that were initially in Siberia. Huskies are good for sledding and other working purposes in cold climates. Because of their thick fur coats, they can withstand freezing temperatures that other dogs couldn’t handle.

Have you ever seen a Husky and thought to yourself, “What an angry dog?” Indeed, their facial expression can sometimes make them look like they’re about to bite your head off, but there’s a reason for it. In this post, we will explore the truth behind why huskies look so angry and what their expressions mean!

One of the important things to know about Huskies is that they are sled dogs, which is one of their primary functions. It means that they work to pull sleds, herd reindeer, and generally be active for long periods. As a result, huskies have a lot of energy and can be very high-strung.

This high energy level can manifest itself in several ways: an “alert” or “on edge” posture. Huskies will often stand upright with their ears perked up, and their tails held high. A piercing stare usually accompanies this posture. It may seem like the Husky is angry or even aggressive to the casual observer.

However, this posture is simply the Husky’s way of saying that they are ready to work. Huskies are always alert and ready to go, so they often appear to have a permanent “scowl” on their face.

Huskies are also known for their beautiful, fluffy tails. But did you know that the way a husky wags its tail can tell you a lot about its feelings?

A happy husky will usually have a loose, relaxed tail wagging back and forth. It is the most typical tail wag and is usually nothing to worry about.

However, a husky feeling threatened or nervous may have a tail held low and tucked between its legs. This type of tail wag should be a warning sign, and the Husky may become aggressive if they feel they are in danger.

Huskies are also notorious for their loud, piercing barks. But just like with tail wags, the way a husky is barking can tell you a lot about how they are feeling.

A happy husky will usually have a high-pitched, “sing-song” type of bark. It is often called a “yodel” and is a husky’s way of expressing excitement or happiness.

However, a husky feeling aggressive or threatened may have a deep, guttural bark. An “on edge” stance is often associated with this type of bark, which reads as an alarm signal.

Another essential thing to understand about huskies is that their ears are very expressive. The position of a husky’s ears can tell you a lot about how they are feeling.

If a husky’s ears are perked up and pointing forward, this usually indicates that they are alert and ready to go. A piercing stare usually follows that same posture.

However, if a husky’s ears are flat against its head, it usually means they feel scared or threatened. It is a warning sign, and the Husky may become aggressive if they feel they are in danger.

Huskies are also known for their habit of licking their noses. It may seem strange behavior, but it actually serves an important purpose.

Nose licking is a husky’s way of cooling down their body temperature. Huskies work in cold climates, and as a result, they have a very high tolerance for cold temperatures.

However, when it is hot outside, huskies will often start to pant, and their tongue will hang out of their mouth. It is their means of cooling down, and if you see a husky doing this, it’s best to give them some water and shade.

Nose licking can also be a sign of stress or anxiety. If you see a husky licking its nose excessively, it may indicate that they are feeling overwhelmed. In this case, it’s best to give them some space and let them calm down.

Huskies are also known for their habit of averting their gaze. It may seem like a sign of submission, but it is actually a sign of respect.

When a husky looks away from you, they show you that they trust you and see you as a leader. It is a necessary behavior to understand if you want to train a husky.

However, if a husky is staring directly at you, it may indicate that they are feeling aggressive or threatened. It is a warning sign, and the Husky may become aggressive if they feel they are in danger.

One of the important things to understand about huskies is that they are very expressive with their hackles. Hackles are the long, stiff hairs that run along a husky’s back.

When a husky’s hackles rise, it usually means that they are feeling aggressive or threatened. It is a warning sign, and the Husky may become aggressive if they feel they are in danger.

However, if a husky’s hackles are relaxed and down, they usually feel happy and comfortable. It is the most common hackle posture and is nothing to worry about.

Huskies are also known for their habit of yawning. It may seem like a sign of boredom, but it is actually a sign of stress or anxiety.

Huskies are also known for their unique markings. They often have white fur on their chests and tails. It is one of the reasons why they are sometimes called “snow dogs.”

Their back legs are usually darker than their front legs. And they often have a stripe of fur running down their backs that is different from the rest of their skin.

Huskies are also known for their “pointed” ears. It means that their ears are slightly pointed at the tips, adding to their angry appearance.

Let us look at some physical features of Huskies that make them look angry.

One physical feature contributing to the “angry husky” look is their eyebrows. Huskies have thick, bushy eyebrows that can make them appear angry or even fierce.

Another physical feature that makes huskies look angry is their mouths. Huskies have a lot of fur around their mouths, making it look like they’re always growling.

The last physical feature that makes huskies look angry is their eyes. Huskies have almond-shaped eyes that are often very expressive. They can convey a range of emotions, from happiness to anger.

One of the main reasons huskies look so angry is their facial structure. Huskies have what is called a “mask” on their face, which is a darker area of fur around their eyes and nose. This mask gives them the appearance of always looking mad.

Huskies also have a very distinct nose. Their noses are typically black and have a lot of fur around them. It can make it look like they’re always snarling.

Huskies also have very thick fur around their necks, making it look like they have “manes.” It is especially true for male huskies. When you see a husky with a big mane, it might make them look even more angry or fierce.

Huskies are also known for their “piercing” eyes. It is because they often have blue or green eyes that can look very intense. Combining this with their bushy eyebrows can make them appear to be staring right through you!

While huskies might look angry, their eyes are one of their most expressive features. Huskies have very piercing eyes that can convey a range of emotions. When you see a husky’s eyes, you might think they’re mad at you. But in reality, they may simply be attempting to communicate with you.

Huskies use their eyes to communicate a range of emotions, including happiness, sadness, anger, and even fear. So next time you see a husky with piercing eyes, don’t be afraid to approach them. They might just want to say hello!

If you look closely at a husky’s face, you’ll notice their mouths are always slightly open. It is because they have to pant a lot to regulate their body temperature.

Panting is breathing that Huskies do when hot or stressed. It’s how they cool themselves down by exchanging warm air for cooler air.

Huskies pant a lot because they have such thick fur coats. They need to gasp to avoid overheating, even in cold weather.

There are personalities worth mentioning that might make huskies look angry.

Huskies are very independent and self-sufficient dogs. They’re not the type of dog that needs a lot of attention or pampering. It can sometimes make them appear aloof or even unfriendly.

Huskies are also very stubborn and strong-willed dogs. They’re known for being “escape artists” because they’re always trying to find a way to get out of their yard or kennel. It can make them appear uncooperative or even rebellious. But in reality, they just want to be free!

Huskies are also known for being very headstrong. They’re not the type of dog breed that will listen to you if they don’t want to. It can make them appear disobedient or even defiant.

It can also make them seem difficult to train or even uncooperative. When you get to know a Husky, you will realize that they are quite independent and prefer to do things their own way.

They’re quick to defend their loved ones if they feel threatened. It can make them seem aggressive or even hostile. But in reality, they’re just very loyal and protective dogs.

Tips for Living With a Husky

Now that you know the truth about huskies and their “angry” expression, you can learn how to deal with them.

Huskies are not aggressive by nature, although they can bite if provoked or afraid. It is important to socialize and train your Husky from a young age so that they know how to interact with people and other animals appropriately.

2. Are Huskies a good choice for first-time owners?

Huskies are not suitable for first-time owners since they require a lot of time, energy, and care. Huskies are also very independent dogs, so they might not listen to commands if they don’t feel like it.

3. What is the lifespan of a Husky?

Huskies typically live between 12-15 years. However, some huskies have lived as long as 20 years!

4. What is causing my Husky to become uncontrollable?

There could be several reasons why your Husky is becoming uncontrollable. It could be a sign of boredom, lack of exercise, or even Separation Anxiety. If you are unsure of what is causing your Husky’s behavior, it is best to consult with a professional trainer or veterinarian.

5. What is the easiest way to know whether my Husky is stressed?

There are a few signs that you can look for to tell whether your Husky is stressed:

These are just a few signs that your husky may be stressed. If you notice any of these behaviors, it is best to consult with a professional to find out how to help your husky.

6. What is the best way to calm an anxious Husky?

You may help an anxious husky by doing the following:

Huskies are beautiful dogs with a lot of personalities. Don’t let their “angry” expression deter you if you’re thinking about getting a husky. They’re very friendly, loyal, and intelligent dogs. With a little bit of care and attention, you can have a fabulous furry friend for life!

Do you have a husky? What do you think about their “angry” expression? Let us know in the comments below!